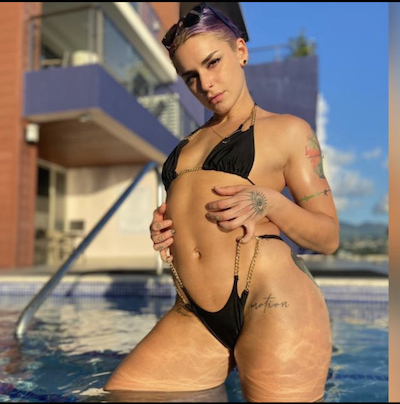 Spunky dancer-turned-recording artiste Lilie is thoroughly enjoying her time in Jamaica. A Russian-Georgian with a German passport, she came to Jamaica to study dancehall music two years ago and through a series of extraordinary events is now releasing her debut single, Brand Me a Rebel.

“The song is basically saying ‘I don’t care, go ahead judge me, this is my life and I’ll live it how I want it’. Everyone is the creator of their own happiness, and that is something I wanted to convey with this song,” the artiste whose real name is Lilie Gorchkov, said.

She said the song is a smack in the face of anyone who has ever made a preconceived judgment of a woman solely based on her appearance.

“Yea, the song is a criticism of the way people often judging others, especially women for what they wear how they act and especially when women are on the way up on their career…they experience a lot of judgement. And most people don’t see you as a person or care to understand what you went through, so this song is for them,” the effervescent 23 year-old said.

The single will be officially released in March 2021 on the After 13 Music label. She will also be releasing visuals for the song next week.

Lilie grew up in Hannover, Germany where she attended Hochschule für Musik Theater und Medien (College for Musical Studies, Theater and Media) in Hannover. She developed an early love for dancing and by the time, she was an adult, she became a professional dancer.

“I’ve been dancing since I could walk, I started with ballet but since then I have danced my way through a lot of dance styles : hip hop , pole dancing, cheerleading, contemporary, heels dance, and of course, dancehall. When I was 16, I got into fitness and made a living off dancing and fitness, doing shows for artistes, video shoots and teaching. I also learned guitar and bass, and drums and started music in Germany,” she explained.

Lilie came to Jamaica in 2018 to immerse herself in dancehall culture and take a couple of dancehall classes, and voila!, she fell in love with the island.

“I fell in love with the island… the food, vibes, the weather, a lot of different things and I looked for a way to move here(to Jamaica). I established myself here by doing video shoots for artistes and teaching hip hop and heel dance classes, and I met a lot of great people and got back into music and here I am,” she said.

The transition from the cosmopolitan German music scene with a smorgasbord of genres like rock, pop, dance, hip hop, and German “Schlager” dominate the airwaves to the flair, raw improvisation and organised chaos of the “all is dancehall” space was not easy at first.

“When I first got into the dancehall scene. I felt all eyes were on me, I felt like I was a stranger, but I realized that as long as you approach them nicely, they are very open, and interested and open minded, then I realized how versatile Jamaica is and how many different sides it has,” she said.

She is gung ho about the opportunity to work with local beatmakers and artistes to blend her Eurocentric pop stylings to dancehall and world music, and craft an authentic new sound.

“In Germany, in music school, I had recorded songs but I never got to record my own songs. But here in Jamaica, I met the right people, showed them my songs and they were like ‘just do it, let’s go!”. I love Caribbean music and dancehall, the music I am doing is pop-oriented because of my influence frm Europe. But I am very excited and curious about what the future brings,” she said.

Lilie is managed by Marlon Hutchinson of After 13 Music. She is working on a number of other pop-oriented singles which will be released later this year.